Last week, in a little pocket of Venice along its iconic Grand Canal, Kuwait arrived in the form of an exhibition. The exhibition, ‘In My Dream I Was in Kuwait’, features drawing, painting and photography works by Kuwaiti artists Ahmed Muqeem, Nasser Behbehani and Khaled Alnajdi.

The exhibition, which is an attempt to share narratives from the country as told by the artists, will run until 1 November. The art show is the second in a two-part exhibition organised by the fine arts centre of Kuwait’s Sheikh Abdullah Al Salem Cultural Centre (ASCC).

The first iteration of the show held from June to September, featured artists Zahra Marwan, Mahmoud Shaker and Amani Al Thuwaini. All six artists have been part of ASCC’s inaugural Artist in Residence program, which began in September last year.

These exhibitions, however, are only one part of ASCC’s program, which also includes workshops and visits to the studios of contemporary artists in Italy. The Kuwaiti artists will also explore the many exhibitions forming the 58th Venice Biennale, which runs until November.

Building on the idea of cultural exchange, the goal of the ASCC is to bring contemporary Italian artists to Kuwait for an exhibition.“The exhibition does not seek to provide a portrait of the Kuwaiti art scene, instead, it presents the plurality of the artistic practices from these six artists,” said the exhibition’s curators Francesca Giubilei and Luca Berta.For instance, Muqeem’s works — portraits of Kuwait’s past leaders rendered in charcoal on paper, as well as a series of paintings chronicling the development of the country’s international airport — reveal the artist’s patriotic sentiments, blurring the lines between historical documentation and personal memory. 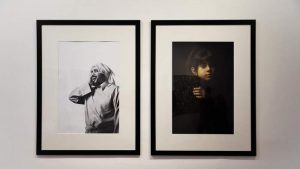 Meanwhile, Alnajdi’s paintings give us a glimpse into his psyche, but also his perception of Kuwaiti society. On the surface, Women at the Balcony seems to be a nostalgic take on Kuwaiti society from the 1960s, depicting a row of vibrantly painted women chatting away. “They’re gossiping, having fun, laughing, but if you see them, they don’t have expensive watches or things,” he says. “They don’t have mobiles. They gather and they socialise, and you can see they are happy.”

In his photographs, Behbehani opts for plain backgrounds, stripping the visuals of context to bring focus to the subject. In the show, two sets of portraits have been placed next to each other as a way to bridge past and present, tradition and progress. For example, a staged portrait of a naham, or the singer on a pearling boat, is placed next to an image of Behbehani’s young daughter looking right into the lens.

The decision to develop this dialogue was led mostly by the curators, allowing the works to have more nuance and depth, said Behbehani. It is a small testament to the importance of exhibition-making and the importance for an artist to see how his work can be shown and perceived by visitors.