To mark the occasion of the 40th Anniversary of the establishment of diplomatic ties between South Korea and Kuwait, the South Korean Embassy launched  a cultural festival at the Sheikh Abdullah Al-Salem Cultural Center on 24 July.  The cultural festival, which was inaugurated by South Korean Ambassador to Kuwait H.E. Hong Youngki, will be a week-long display that highlights the heritage, traditions and crafts of South Korea, and shares their significance with audiences in Kuwait. 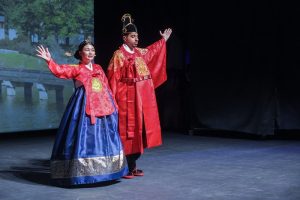 The embassy is organizing the activities and events in collaboration with Sheikh Abdullah Al-Salem Cultural Center and the National Council for Culture, Arts and Letter. Among the various highlights of the festival are modern, and traditional, performances by the International Youth Arts Troupe of South Korea, which will take place respectively at the Sheikh Abdullah Al-Salem Cultural Center and Abdulhussain Abdulridha Theater.